I am no longer updating this blog. However, I have moved much of the content to the Reasons To Believe Educator's Help Desk. I'm also adding new content there, such as curriculum reviews, webinars and vodcasts.

I'll leave this blog up for the time being because I know that people are still accessing it.

P.S. You can also write to me at homeschooling@reasons.org.
at 7:19 PM No comments:


Your site was recommended to me b/c I'm searching for a high school biology text that gives equal presentation to creation and evolution. Any recommendation? If not, which secular texts would you recommend?

I'd recommend the book, Explore Evolution. Here is a brief review of the book that I wrote recently.

You can also read a previous post I wrote along these lines. Hope that helps.
at 9:14 AM No comments:

Why is it that every Christian knows about the Piltdown man fraud, but they don't know about any of the really cool evidences from paleoanthropology that correspond with Genesis? Rather than looking to scientific discovery as a positive thing, many Christians are firmly entrenched in the dubious belief that frauds abound in science.

Here is another perspective on the issue.


Scientists abide by a strict set of principles that ensures their work is both innovative and sound — most of the time. On rare occasions, the pressure to publish, win grants and earn tenure tempts some to stray from the hallowed pledge that maintains our faith in their results: commit no fraud. And when they do, our censure is swift and merciless.

This is what my colleague, Fuz Rana, calls the "self-correcting" nature of science. It's important to teach children how to be discerning about science, but at the same time we don't want to teach them to be so entirely distrustful of the scientific establishment either. Overarching mistrust and conspiratorial beliefs will cause Christians to miss out on the best evidences for the accuracy of the Bible. And engender skepticism in Christian young people.

Do frauds happen? Sure. But they're the rare exception. And judgment within the scientific community is often harsh when it's uncovered. And entire careers can be built on proving someone else's work is false. Conspiracies only stay secret for so long. Eventually, the truth has a way of coming out.

Here is a gallery of the most spectacular falls from scientific grace.
at 9:33 PM 1 comment:

Email ThisBlogThis!Share to TwitterShare to FacebookShare to Pinterest
Labels: crackpot apologetics, science in the news

For all the discussion about science education and homeschooling, this author offers some of the best advice I've seen in print. I'd like to echo a hearty "Amen!" to his sage advice.


I teach sophomore through senior level college students - most of them are "pre-professional" students. They are preparing to go to medical school, dental school, physical therapy school, etc.

As a generalization, I've noticed certain characteristics common in my students who were homeschooled. Some of these are desirable, some not. Read more...

Mr. Landry offers a number of good resources for homeschoolers on his site as well. Definitely worth checking out!
at 8:36 PM No comments:

Email ThisBlogThis!Share to TwitterShare to FacebookShare to Pinterest
Labels: education

In this episode, Krista Bontrager explores some of the historical and cultural meaning behind the traditional Christmas story. She discusses the shepherds described in Luke 2 and how these unlikely heroes became the first evangelists.

Visit my personal web site to find out more about me and how to book me to speak to your church or homeschool group. You can also contact Reasons To Believe.

Wondering where to start?

1. Watch my vodcasts on the Videos page.

3. Browse old posts topically by using the search bar at the top left corner of the page.

Looking for the "Right" Resource?

Before writing to me, please follow the steps in the "Wondering where to start?" box above.

If you still can't find an answer, feel free to send me your question about science, the Bible and homeschooling.

This year-long science apologetics program is designed to prepare high school students to confront key questions related to the interface between science and Scripture that they will encounter in their university studies and beyond. 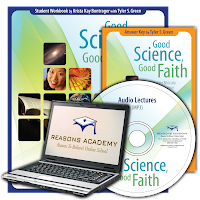 Introduce your church or youth group to the biblical basis for old-earth creationism.